When Crickets Invade Your Home 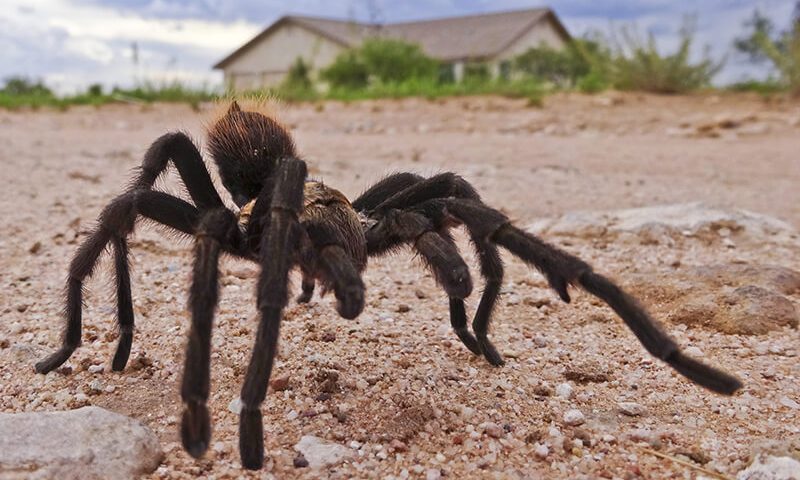 Tarantulas Are Not As Fearsome As You Might Think

Tarantulas are a common sight for Arizona residents. Unfortunately, when many people, see these spiders, they are likely to react with fear and revulsion. But once you get to know the tarantula better, you’ll understand that they don’t deserve this reaction. You might end up even adopting one as a pet.

The Myth of the Deadly Tarantula
One of the most prevalent myths surrounding this spider is that they are highly poisonous and dangerous to humans. It is a misconception that Hollywood loves to propagate. In fact, whenever you see a tarantula in a film, it is usually something to be feared.

But the truth is that, while tarantulas are venomous, their bite is not poisonous to humans. Of course, there are some species found in Asia and Africa whose bite may result in minor illness. But the tarantulas that are most commonly found in the deserts of Arizona have venom that has very low toxicity to humans.

The main reason for their fearsome reputation is their appearance. Tarantulas are among the largest spiders in the insect world and are also frequently hairy. Their scary looks, along with their docility, make them popular for use in movies since they are easy to handle on set while generally being harmless to actors and crew who need to be in contact with them.
Some experts have speculated that tarantulas are also mistaken for other, highly venomous spiders that resemble them. One such spider is the Brazilian wandering spider, which is also hairy and has a fairly long five-inch leg span, but is highly poisonous to humans.

The Gentle Giant
Although there are some 30 species of tarantula found in Arizona, the one that residents are most likely to encounter is the Aphonopelma chalcoides, better known as the Desert Tarantula. Contrary to their reputation, these spiders are usually docile and will bite only when extremely provoked.

While tarantula bites are not toxic, they may cause allergic reactions in sensitive people. If you are bitten and you suffer serious symptoms such as shortness of breath, seek medical assistance.
However, they can defend themselves in another way. Tarantulas have barbed hairs on their abdomen. When threatened, they can flick them at an attacker, and these hairs are known to be very irritating.
Desert tarantulas can grow to a three to four inch length as adults, with females being larger than males. Females are also stockier and covered in hair that is light brown or tan, which is why they are also called the

Arizona Blonde Tarantula.
Tarantulas are also long lived, with females able to live as long as 25 years. Males, however, may live only half as long – ten to twelve years.
Unlike other spiders, North American tarantulas are ground dwellers. They do not spin aerial webs to catch prey.
Instead, tarantulas live in burrows up to six inches deep. They line the walls with silk to prevent them from collapsing. They also put ‘trip wires’ around them to alert them when prey passes by.
Tarantulas eat other small spiders and insects such as beetles and grasshoppers. They may also be able to capture small lizards.
Tarantulas ambush their prey rather than capturing it in their webs. They hold down their prey with their legs while injecting venom into it. They then kill the insect using their fangs. Once the prey is dead, they inject its body with digestive enzymes to liquefy it’s insides, and then suck it into their mouths.

Due to their docility, tarantulas have become increasingly popular as exotic pets. They are very easy to keep and only need a small enclosure to serve as its home. However, you should handle them only when necessary to avoid getting bitten or struck by their irritating hairs.

DIY Tarantula Control
Although tarantulas are generally harmless to people, their bite might cause some harm to pets or small children. Some people who are afraid of spiders might also become anxious at the sight of tarantulas. If you would like to eliminate them from your property, here are some of the things that you have to do.
The first step is to make your property inhospitable to tarantulas. Since they eat insects, this means that you will have to remove any sources of prey for them, as much as possible.

One important thing is to remove as much clutter as you can from your house and property. This clutter attracts insects to your home, which will also draw tarantulas. You should also do preventive spraying to kill as many insects as you can.

Inspect your house for places that allow tarantulas to enter. Look for torn window and door screens, cracks in the siding and crawl spaces large enough to allow the spiders to enter. Repair or seal these to deny them access.

If you suspect that tarantulas have already entered your house, you can check for their presence at night, since this is when they are active. If it is mating season, however, you may spot male tarantulas during the day, when they emerge to look for mates.

To capture tarantulas inside your house, you can set up glue traps. Once the spider has been captured, you can quickly eliminate it.

If you want to be more humane and capture the tarantula, you can simply chase it into a jar using a long handled brush. Once you’ve trapped the spider, you can empty the jar as far away from your property as you can.

However, you are most likely to find these spiders in your yard, since this is where they will dig their burrows. You can use dry or wettable powders on the nests to kill the spiders and their egg sacs. Once you’ve killed the spiders, you can use a small vacuum to remove the remains.

When eliminating tarantulas, you should wear protective gear to protect yourself against their bites or their irritating hairs. These include gloves and safety goggles.

If all else fails, you can contact a professional exterminator to advise you on pest control. They will do an inspection of your property to determine if there are tarantulas present and devise a plan to exterminate them. 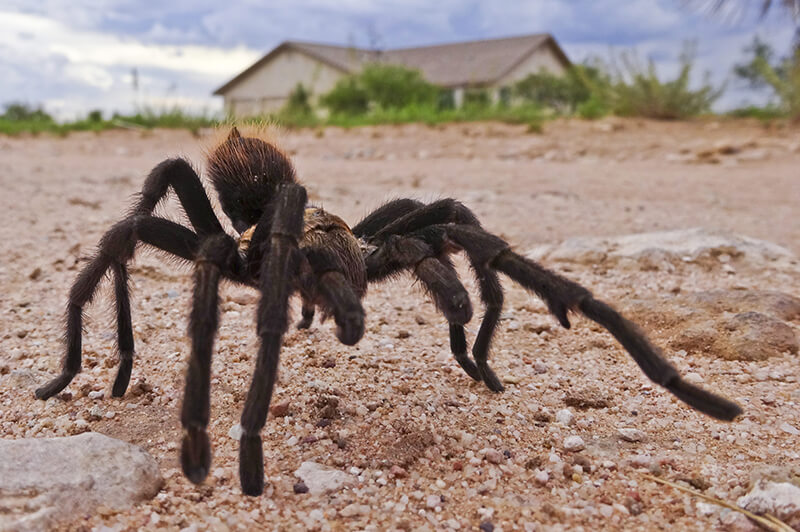